The beginning of my downfall

Certain fish form addictions faster than others.  I caught my first false albacore in 2011, and the hook was immediately set (in me).  The excitement I experienced chasing them and the frustration I felt failing were almost maddening.  Here's my tale of that experience.


Back from Block Island after having had a great time with family and friends. I thought I would share a brief summary of the week's fishing.

My mission for the week was simple: to catch a false albacore. On fly if possible, but there were no rules. I brought fly gear plus two spinning setups. Whatever it takes. Needless to say, we were well equipped.

To make the most of the time available, I opted to spend the week fishing the early shift. The girls would be up around 7:30 to 8am, so my window was 5-8. My friend Patrick joined us for the first two days, and together we hit the dawn shift.

Before dawn we cast to schoolie stripers in the shallows, but the bait was so plentiful that we didn't find takers. Getting a fly to stand out was a tough sell. As soon as the light crept into the sky, the stripers vanished and the hunt for albies began.

From Saturday through Tuesday, I plied the shore game. Saturday we watched as birds blitzed bait on the far side of the Coast Guard cut. It was well out of reach, and eventually the action stopped. We explored some of the area. 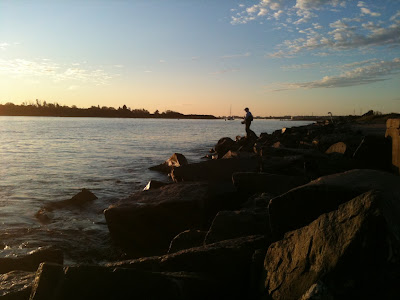 No birds, no players. All was quiet. We retired for the evening to make a plan, and to tie a few flies. 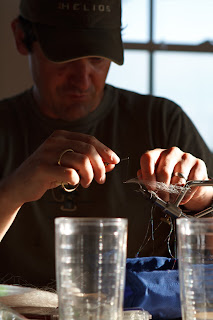 The next day brought change. Friends Jim and Lori had taken the ferry over to join us for a couple days. At 5am Patrick and I met Jim at the foot of the stairs. “I’m taking the first ferry home. Lori having contractions.” Sure enough, their little daughter joined the world the following day.

So, without Jim we arrived at the water at the same time-- o'dark thirty. Again the schoolies teased us, and again the bite shut down at dawn. We fished the Coast Guard cut. Suddenly we heard a ruckus from the Salt Pond. Cormorants were flying in, landing in waves of two dozen. There were hundreds of birds, frantically searching the water. Then all hell broke loose. Miniature tunas flew from the water, bait surged from the water in great sprays trying to escape the twin deaths from above and below. The fishermen were whipped into a frenzy, but like frustrated teenagers on a date, the desire was strong but we couldn't close the deal. The fish never came within 200 yards. We watched in awe as the frenzy lasted perhaps ten minutes, and then was gone. The only thing that remained was a few cormorants hopeful for more, and the dull ache in my casting arm from futilely hurling 100+ foot casts in the direction of the blitz in the vain hope a straggler on the edge of the school would find my offering.

This was a game of chance. A lotto ticket. Be in the right place, at the right time, with the right offering, and maybe you'd get lucky. Maybe.

I went back on Monday. This time I was in the right place and right time. A small blitz blew up 20 feet away. I fired a cast. And another. Three more. Then it was gone. 8 anglers present and one hookup. And then it was done.

Fish madness starts to set in. I've fished three days without so much as a tug. I wanted that albie. I thought about doing the night shift for bass, but that wasn't going to do it. So, with my figurative lottery ticket in my pocket, I went back on Tuesday.

It is an interesting group of anglers that lines the Coast Guard cut. Everyone understands the game is a waiting game. Some think it is tide driven. Others prefer dusk and dawn. I think it's both. And a lot of random chance. And a huge helping of madness.

Tuesday we again had one very brief blitz from shore, but it was brief and never came close to me. Then it was gone.

But worse than gone. The fish moved into the harbor, and for over an hour I watched as pods of albies chased bait straight into the sky and into the mouths of waiting gulls. By 8 am I was sitting in my truck, shaking hands on the wheel. This could truly cause insanity if it went on for too much longer. I needed a solution. A comment Patrick made early in the week came back to me.

I spent a good two hours on Tuesday trying to hunt down a kayak. With many of the businesses wrapped up for the season, it felt a bit like a drug deal. You need to speak to Gabriel. She has Tory's phone number. Tory runs the boats for Charlotte. Be there at 2:30. I pull up. Someone runs out of the back of the restaurant kitchen next door. Cash is exchanged. I drive away with my score. I'm a junkie and I'm hoping this is my fix.

It takes me a while to get sorted out for fishing from a boat. I find cord to tie my rods and paddle to the boat. I sort through my gear to get spinning and fly gear down to one bag. Pre-dawn, I drive down to a beach in Cormorant Cove and rig up in the darkness. I'm slow, I'm late, but I have my solution.

It's not to be. I'm in my boat along with one other kayaker. A center console patrols the area. Fishermen line the shore. We're prepared. The albies aren't. They decide not to show today. Madness continues. Tomorrow is my last shot.

I'm back at dawn. 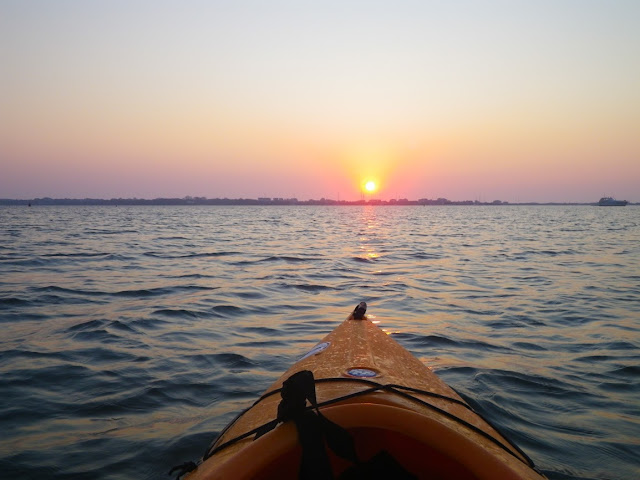 Today is my shot. Today the winning ticket is mine. I paddle to the Coast Guard cut. I'm the only boat. The sun rises. All is quiet.

This repeats itself. If nothing else, I'm getting my exercise.

Then it pays off. The boat isn't a magic solution, but I'm getting shots that I wouldn't otherwise. The wind is up, about 15 mph. Screw the fly rod, I'm using my spinning rod loaded with a Deadly Dick.

I fire casts into the Blitz but there are no takers. Guys from shore are getting in the mix, too, when the fish are close.

Another blitz! I fire a cast. The braided line is taken by the wind into a long arc away from the lure, when... disaster! The braid catches a flying cormorant and snaps. The bird croaks in disdain and then flies on toward the carnage of bait and leaping albies. I'm left holding my spinning rod, contemplating how long it will take to tie on a new leader and lure. I tie off the braid and pull out the fly rod.

My range is short. The shots are fewer because of that. But the offering is right. On the third cast I get a satisfyingly solid pull back as I strip in a small surf candy. 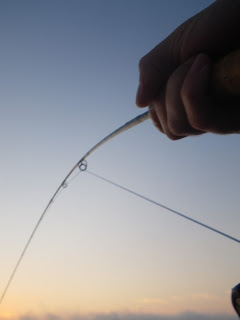 Albies are known for their fast runs, and this one didn't disappoint. Line quickly spun off the reel.

I quickly discovered that fighting a fast fish from a kayak can get a little interesting. It ran back at me, under the boat, and then shot off the opposite direction. The pull was impressive. I gained line and saw leader. Then it sounded. 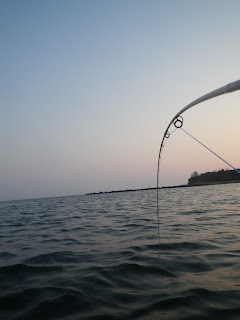 The rod bent to a U as the fish went straight down. A standoff ensued. For a few minutes I gained lined a couple feet at a time, levering the rod bod against the fish. Again I saw leader, and again the fish was off. A few more runs, and then the end game began.

The end game with an albie from a kayak is a challenge. The fish circled the boat, and I did my best to avoid letting the rod tip contact the bow and stern. First attempt to tail it failed. Second, failed. Third time I went for the leader, dropped the rod into the boat, and tailed the fish.

The photo doesn't do this fish justice. The colors are gorgeous. The skin is perfectly smooth. The tail seems impossibly skinny (makes a great handle). The shape is perfect for speed and ballistics.

Heart pounding, I fired off a couple shots and then released him back to the water. 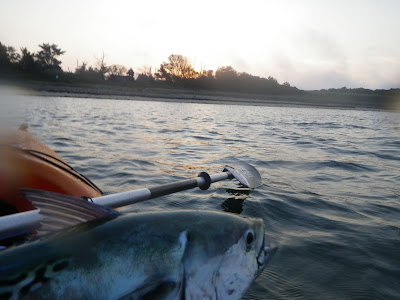 The sun was coming up from behind the trees. The blitzes continued a bit longer and then shut off. The heart pounding insanity of the chase, the cast, and the fight began to fade. I had one break off and landed an 8-pound blue. I pulled the 'yak and called it a day.

Albie, on the fly. Mission accomplished. 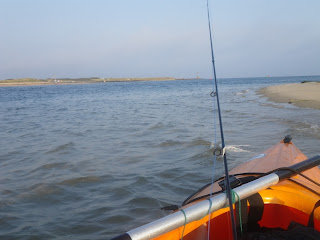 Posted by Running for Hardtails at 4:32 PM