A Martha's Vineyard vacation with the family is a grand slam


We had wind all week. 15-20 kts and greater was typical, and it was mostly northeast. This wasn't shaping up to be a good September vacation, at least for the fishing part. It meant more beach time with the kids, and that's also great.  Unfortunately with the strong winds, even finding a beach in the lee was tricky. On a Monday we ended up at Menemsha, and my daughter wanted to fish so who could say no? Unfortunately family patience being what it is when traveling with a 3- and 5-year-old meant that lasted about 15 minutes. Casting off the Menemsha jetty was just a tease.

The wind just wouldn't let up. A few of the places I wanted to kayak like Cape Poge Bay were just off limits. It was frankly frustrating, but at least it validated the decision to bring the kayak and not bother with the boat.

On Tuesday I was back at the jetty in Menemsha.  Recalled scenes from David Kinney's The Big One, the story of the Martha's Vineyard Derby played in my mind.  Sure enough, the fly rodders camped on the Lobsterville side, and the spin casters on the Menemsha. As a kayak, I was odd man out. I launched on the sound side from the beach and bobbed in steep 2-3 foot chop. I rode the strong current into the pond and fished there. I padded back out and fished the sound again. A small blue and a porgy were the only activity for me. The boys on the jetty didn't seem to be doing any better.  After a few hours of getting slapped around in the waves I called it a morning and headed for the house.

Wednesday was evening windier. I slept in.

Finally there was break in the wind on Thursday.


The weather window opened up only the night before. At first I was on the fence-- we had other family plans-- but this was the only window and I jumped on it. I got the boat ready the night before and headed out around dawn directly from our rental house on the pond.


The tide was mid-outgoing. I threw a x-rap minnow in the water and trolled my way toward the pond cut. Bang! Fish on within 200 feet and I had my first striper of the trip. Just a schoolie, but a nice sight.

There were a couple other kayaks inside the pond near the bridge. I waved and headed under the bridge. It's low enough that you need to take down your rods, so plan ahead if you're sweeping through on a strong current. Now outside in Nantucket Sound, I set up to the side of the outflow and drifted with it a few times, casting into the current and letting my lure swing.  The fly rod was rigged and in the rod holder, but for blindly searching water the spinning rod is a more effective tool.  The bottom here is only 4- to 5-feet deep, but a 100 yards past the jetty tip it drops off quickly to about 25. I drifted past and then padded back up toward the bridge for another drift.

On the first return, I picked up my next customer, a bluefish who was also caught trolling as I paddled back upcurrent.  Released him with smile. "You know," I thought to myself. "Add an albie and it's a slam." It wasn't a greedy thought, more idle musing.

I decided to fish the drop off and switched over to a bucktail tipped with a zoom fluke. On the first drift I had several sharp taps. No connection. The next drift I got the tap again and set the hook hard. This time it held true, and a nice fat black sea bass came to hand.  He looked awfully tasty, but the house didn't have a cutting board and I was feeling lazy, so he went back in. "Three species morning," I thought.  This was fun. 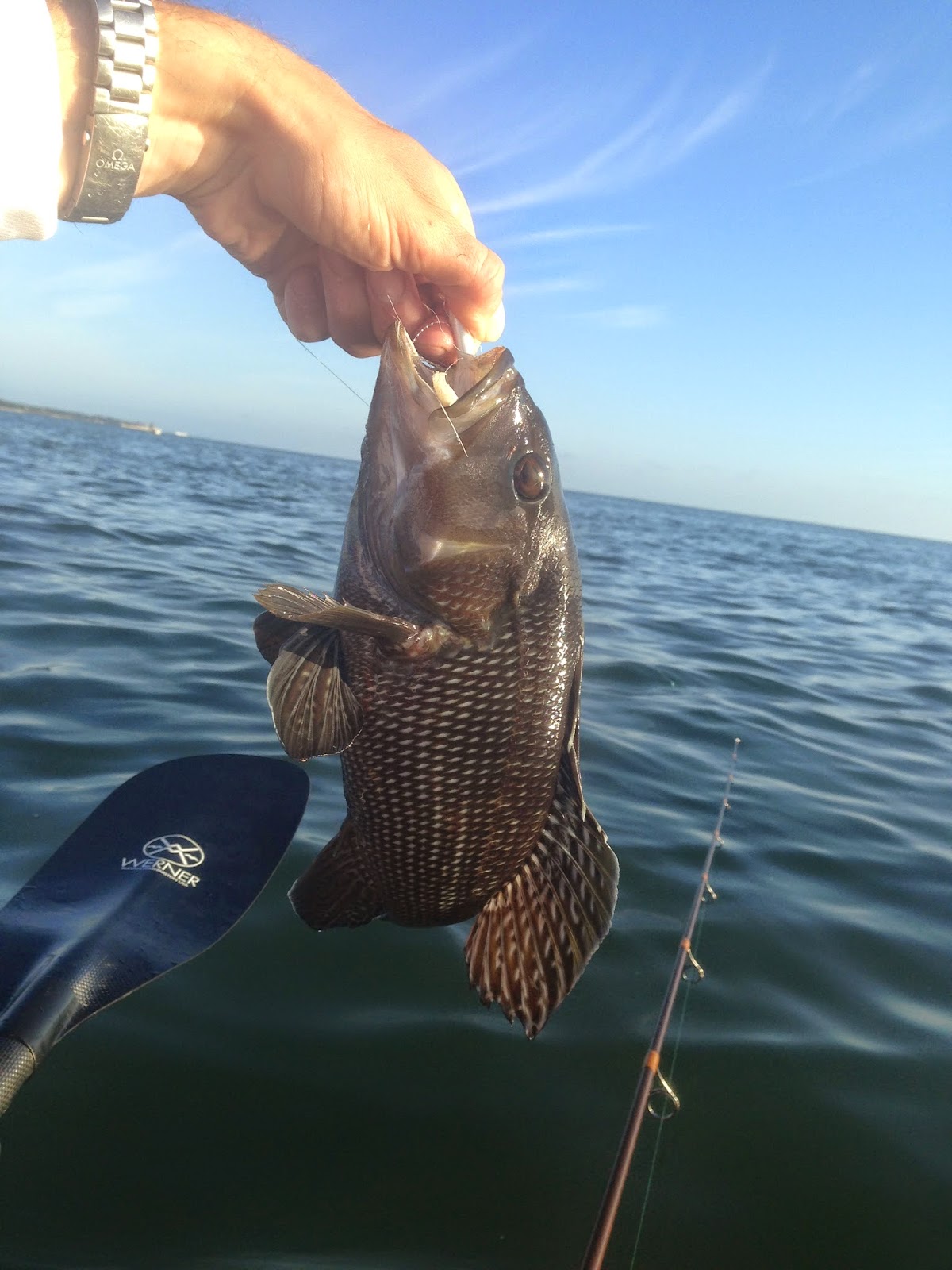 A couple power boats drifted in the area, waiting for albies to show. One had a couple guys with spinning gear.  The other was a solo fisherman with a fly rod.  The gear guys were impatient, fanning the water with casts, getting nowhere. Fly guy waits. Eventually the gear guys get tired of flogging the water and motor off to parts unknown.

Now it's me and fly guy. I slowly paddle toward the jetty tip and set up just west of it out of the current. Silverside form clouds in the clear water. They are everwhere.  My spinning rod is stowed. An 8-weight is in my lap with line stripped out. I throw a few casts at the jetty to see if anything's stirring there.  Then I drift and enjoy the view.

Fly guy and I look at each other and nod. "Lot of bait," I say. "Now we just need to guest of honor."

"Look behind you," he says, and points. 150 feet away the tell tale slash of false albacore on small bait blows up in the shallow water off the jetty tip.  I grin and paddle in their direction, 15-20 hard strokes. Then the rod is in my hand and I fire a cast. Buck fever has a grip on me and it's not a great one. I back cast again and fire it off. Strip, strip, strip and the fly is in sight.  Another cast, and this one gets some distance. It lands in the area where they'd boiled ten seconds before. I strip once, twice...

and the line stops.

In my limited experience with albies, the hook set happens so quickly that I've focused only on getting the line cleared and the fish on the reel.  This one was different. A head shake. A pull. The fish didn't run. "Bluefish?" I wondered to myself.

ZZZZZZZZzzzzzzzzzzzzzzzzzzzzzzz!!!!!  The fish was off to the races. Denial was over and it ran for it's life, burning drag and streaking backing toward the west. I laughed out loud and called out a thanks to fly guy, who waved. He was quietly motoring into position for his own shot. And my fish headed for for the horizon.

He began to tire and slow. I glanced down at the GPS display on my kayak and found that mighty little 8-pound fish was pulling almost 250 pounds of kayak and angler at 2 mph. He tired and I gained line. With the shallow water he couldn't bring the fight vertical, and I had a hand on his tail in short order.  A quick photo op and off he went.

It was then that I realized I'd pulled off my first grand slam, from a kayak.  I chased another school for 10 minutes, but it was time for breakfast and it really couldn't get any sweeter. I paddled back into the pond, where I had a slight delay casting at yet another albie boil before heading back to the house.

For our next trip I now have some intel on where to trailer launch a boat. That creates some interesting possibilities so long as there's a place to store the boat on shore. The ferry fee is less than a slip, and it eliminates the uncertainty of a bad weather crossing forcing you to change your plans.  The wheels are already turning...
Posted by Unknown at 4:13 PM No comments:

They refer to the "dog days of summer" because Sirius, the dog star, is visible in the sky.  Most striper fishermen, however, think it's because the fishing is for the dogs.  I had a nice long dry spell from July 3 through August. Admittedly it was partly due to lack of effort at the right times of time.

The determined fishermen go nocturnal or log many hours in the car heading to points east. For me it's a chance to catch up on sleep lost during early morning outings in May and June. Don't get me wrong-- being able to play on Long Island Sound while the water is warn is terrific. Family outings become more of the focus when the fish aren't around. We go sailing. The kids have a blast on snapper blues.


This summer it does seem that there were fewer big fish around. There were some stripers around for people making the effort. We had a few fun outings casting small flies to 12-14" bluefish blitzing on the surface, but they seemed to average on the small side

What's nice to see is the quantity of bait. Schools of adult menhadden stuck around all summer, and they've grown fat while enjoying respite from harassing schools of big stripers and blues.  This gives hope to fishermen hoping for a good fall run.  The calendar and morning temperatures in the forties tell us that it's fall. The fishing is getting interesting again.
Posted by Unknown at 4:14 PM 2 comments: